During VMworld, Datrium launched a unique DRaaS solution completely integrated into VMware Cloud on AWS. At a high-level DRaaS if a complete DR solution offered as a subscription that leverages the VMware Cloud and native Datrium cloud-based backups to deliver a fully-orchestrated low cost, low RPO and lower RTO disaster recovery for VMware customers.

Datrium provides fully integrated purchasing, support, and billing for all components and services, including VMware Cloud on AWS and AWS itself. It’s delivered as a SaaS solution that eliminates all the complexity of packaged software.

All Datrium services are deployed as AMIs into a Datrium-created VPC and Subnet. VPC endpoints used to access all other external services required by Datrium components (ControlShift and Cloud DVX) are also created automatically. All components are monitored and restarted for high availability and resilience. All required state is replicated to ensure resilience.

However, some of the most asked questions relate to networking connectivity options to VMware Cloud on AWS when in DR more. Please note that this blog post is addressing user and site connectivity to applications running on VMware Cloud in DR mode, rather than Datrium replication between on-premises and Cloud DVX. The replication between on-premises DVX and Cloud DVX is done using native snapshots coupled with universal deduplication and compression, and transmitted over a HTTPS tunnel over the Internet.

At this point, if you are not yet familiar with Datrium DRaaS, I suggest you to stop reading and briefly read World’s 1st Just-in-Time Cloud DR (VMware Cloud)… Everything Techies Need to Know….

There are a few options when it comes to connecting on-premises datacenters to VMC on AWS. Below are the four most common options, but please note that the options below are addressing user connectivity to their applications, rather than Datrium replication between on-premises and Cloud DVX.

AWS Direct Connect (DX) is a service aimed at allowing enterprise customers easy access to their AWS environment. Enterprises can leverage the DX to establish secure, private connectivity to the AWS global network from their data centers, office locations or co-location environments.

IPsec VPN is a feature of VMC on AWS which provides secure access to On-Premises management and workload connectivity via a secure IPsec VPN tunnel.

There are two types of IPsec VPN’s that can be used with VMC on AWS:

A 3rd party Virtual Private Network (VPN) solution can be used to extend an on-premises network to a public cloud SDDC. Many VPN solutions providers offer a virtual appliance deployment option. These vSphere compatible appliances can be deployed into VMC to offer another method of extending an on-premises network to or enabling individual users to access workloads running within VMC.

Accessing VMC Workloads on the Internet

The connectivity options above enable secure, controlled access to workloads running within VMC. However, if a user is neither on-premises or using a secure VPN client, internal workloads will be inaccessible when in DR mode on VMware Cloud.

Datrium ControlShift DR plans are responsible for creating mapping rules between on-premises networks and VMware SSDC networks, if necessary, and as part of the DR plan ControlShift can also re-IP VMs accordingly. When it’s time to fallback, ControlShift will automatically reverse the IP addressing to the original ones, along with transferring only unique data back on-premises. 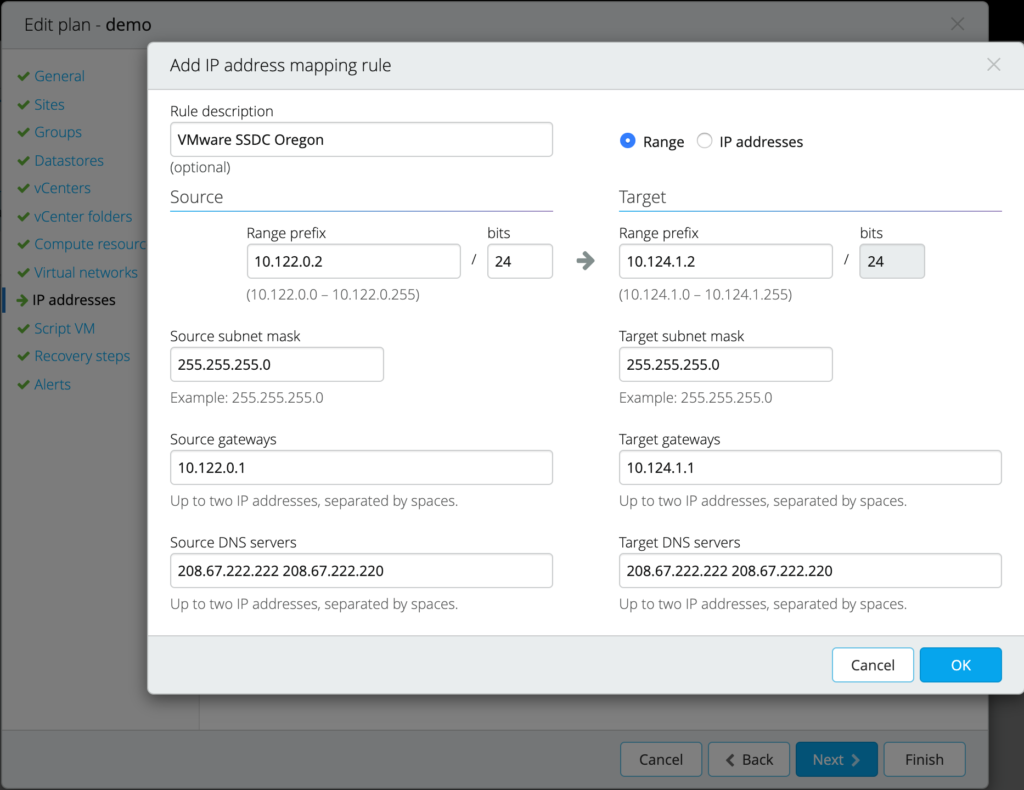 Thanks to Mike McLaughlin and Simon Long for crafting most of this information.